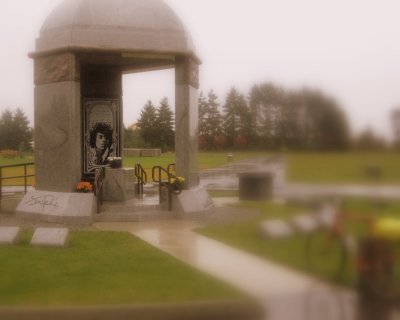 One of Seattle's most famous native sons is Jimi Hendrix, but I didn't know until yesterday that he was buried right down the road in Renton.

As the steady drizzle made it dark and gloomy here this Halloween — there was almost a purple haze in the air — I thought it would be an interesting experience to take a bicycle ride down there.

There's nothing scary or spooky about the Jimi Hendrix Memorial, but it did make it onto a list of six locations that are considered Haunted Renton on a map created by EarthShod.

The Jimi Hendrix Memorial is located at the Greenwood Memorial Park on busy 3rd Street in Renton.

The memorial is among the largest edifices at the cemetery and easy to find. It's essentially a granite dome supported by three pillars. It dates back about five or six years, and appears to be further completed than descriptions I've read.

Inside there's a large granite block. I assume that will hold the Jimi Hendrix brass statue that's being sculpted in Italy. Likenesses of Hendrix are etched into the pillars. There also are lyrics from some of his songs, apparently in his own handwriting.


I understand there are usually visitors around, but I didn't see anyone out there in the rain today. Potted mums decorated the memorial.

My pilgrimage to the memorial involved a 17-mile round-trip. I chose to head down to Lake Washington, then climb Kennydale Hill on some back streets to the Greenwood Memorial Park where Hendrix is interred. Some road work on Coal Creek Parkway/Duvall Road forced me to make a detour on the way home. Extra miles usually aren't fun in the rain.

A visit to the memorial would be a 5 or 6 mile sidetrip off the South Lake Washington loop that's popular among cyclists here. The Greenwood Park is on 3rd Street in the Renton highlands; I'd recommend back streets as the direct route didn't have bike lanes.

Here's the official Jimi Hendrix website; and a map to the Greenwood Memorial Park.

Permanent link to this article: https://www.bikingbis.com/2008/10/31/halloween-bicycle-trip-to-jimi-hendrix-memorial/