Reroute of Stage 5 tour of California 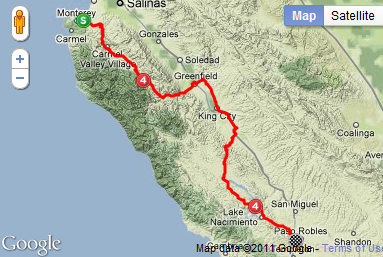 The Amgen Tour of California is rerouting the
stage along the iconic Big Sur coastline south of Monterey because
Highway 1 is blocked by a landslide and might not be open in
time.

The Stage 5 route from Seaside to Paso Robles
on May 19 will have to skip the breathtaking images of cyclists pedaling
along the Pacfic Ocean through Carmel, San Simeon, and Big Sur to
Cambria.

Instead, Stage 5 has been redirected (click
on image to see
interactive map) from Seaside onto hilly interior roads
leading into the Carmel Valley and onto the Highway 101 corridor before
turning off at San Lucas toward Lake Nacimiento and the finish in Paso
Robles.

Some of the roads in the early
part of the stage will be familiar to fans who attend the Sea Otter
Classic at Laguna Seca in the spring. Instead of following the scenic
coast, the peloton will head into California's so-called Salad Bowl
region, known for its vegetable crops.


Four King of
the Mountain summits will challenge the cyclists, who will travel 135
miles and gain about 10,000 feet of elevation. The new route is shorter than the original 144-mile section that followed the Pacific Coast from Seaside to Cambria before heading inland to Paso Robles.

Now in
its sixth year, this will be the first time the Tour has visited this
inland area of the state.

The route closure through Big
Sur hasn't been the only difficulty facing the Tour of California, which
rolls out May 15-22.

A section of Highway 50 between
Sacramento and Tahoe will be closed for repairs beginning May 11. While
it won't effect the Tour's race route, it will require fans to take
detours to reach Stage 1 at Tahoe on May 15.

Check
the Caltrans Highway 50
closure website for maps and information about alternative
routes to Tahoe.

Permanent link to this article: https://www.bikingbis.com/2011/05/03/tour-of-california-reroutes-big-sur-stage/