After another breakfast of instant coffee, Pop-tarts and juice, we followed the campground owner’s directions back to the TransAmerica bicycle route via the historical Washington-Rochambeau Revolutionary Route. 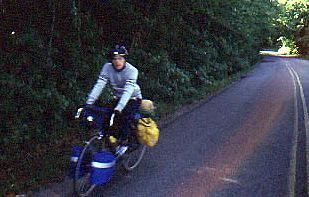 The term “shakedown cruise” seems to apply to our trip so far as things seem to be falling off our bicycles. While trying to fix something else today, Bruce lost a spring from a cotter pin that attached his front panniers to his low-rider racks. It seems we’re both making frequent stops to investigate squeaks and other strange sounds from our bicycles.

We pulled into Ashland about noon and decided to camp at the Americamps campground adjacent to a business park and an interstate highway. Not very scenic. We’re getting used to everything now and plan to put in more miles tomorrow.

Something neither of us are used to is our diet. Pop-tarts for breakfast, snack at every country store we pass, then tuna noodle casserole at dinner. Tonight we tried omlettes for dinner, but  I’m already hungry again.

Headline: May 15, 1984 —
The Red Cross begins evaluating a test
to detect AIDS in blood donated for transfusions,
despite of what experts consider a small risk…
(…”And the Band Played On“).

We are camped at an Americamp Campground only spitting distance from Interstate 95 near Richmond.

We are technically in Ashland, a town of 2,300. We put in here in the early afternoon, another short day to make sure our knees don’t act up later. Both of us are sore, but not to the point of delaying us.

The thee-ater, as one woman called it here, was playing “Footloose.” All seats $1. Our campground is anything but scenic, although the ride today, mostly on Route 606, was extremely nice.

It was the same route, according to signs, that Washington and Rochambeau traveled during the Revolutionary War. Ashland itself has an historic district with beautiful homes which line both sides of a railroad tracks. It reminded me of the neighborhoods in New Orleans where the trolley cars run from the city to the suburbs.

We are surrounded at our campsite by truck noise from the interstate and visual obstacles such as an office building (directly across from us), an access road (also across from us) and a lot of RVs; the nicest are the Air Streams.

It’s going to be cold again tonight; from what one man said, down into the 30s. Today was chilly riding, especially in the morning. I wore polypro bottoms and tops, sweats, turtleneck, wool sweater, gloves and a hat under my helmet. And it was 80 the day before! In two weeks it will be June.

As for the bugs, however, summer is already here. Gnats are everywhere in annoying abundance, and mosquitos bothered us our first night camping. For some reason, though, neither of us has used the Cutter’s insect repellent.

I took a few pictures today, but so far nothing has caught my eye. It seems as though when you are in a picture-taking mood, you will generally find good shots, and when you are not, you can pass a cloud the shape of a smoke ring (as we did this afternoon) and you will simply nod, take note that it would be a good shot, and keep on going. We kept on going.

Day 4 — Give me cycling or give me death

About the picture — Bruce bundled up on Rochambeau route