The City of Renton (WA) has lowered the speed limit for bicycles to 10 mph on most of the Cedar River Trail. Bicyclists must dismount on the remaining sections. [See maps below]

Violation of the speed limit carries a $101 fine, according to signs posted on the path.

The Cedar River Trail is a rail-trail that runs from the mouth of Lake Washington to Landsburg, a distance of about 17 miles. The restrictions of bicycle riders target only the western 4.5 miles of the trail in Renton.

The measures are a reaction to the death of an 83-year-old woman this spring after she stepped in front of a moving bicycle about a quarter-mile from where the trail passes under I-405.

Both the woman and the 57-year-old bicyclist fell to the ground and were knocked unconcious, according to news reports. The cyclist recovered at the scene, but the woman later died of her injuries at the hospital.

No charges were ever filed in that case. Renton's mayor and city council set about limiting or restricting bicycle use on the multi-use trail at its next meeting.

According to the RentonReporter.com, the tragedy “resulted in numerous e-mails and calls to city officials and the media, many expressing outrage at her death and relating near-misses on the Cedar River Trail.”

At the council meeting (“Council considering slower speed limit for Cedar River Trail“), members of the woman's family spoke to the City Council, as did others who have had collisions or near misses with bicyclists over the years.

Enforcement of the law also was discussed at the meeting. The RentonReporter article said police would patrol the trail, and police cadets could patrol during busy times and could issue warnings.

The ordinance instituting the maximum bicycle speed limits were passed unanimously by the Renton City Council on June 28.

In addition to posting the lowered speed limit on the trail (it originally was 15 mph), the city painted a yellow line down the center of the trail within the past week or so.

According to a press release issued May 25, the solid yellow line in the middle of the path is a “no passing zone;” the dashed line means trail users stay to the right of the line unless passing.

The additions to the rules and regulations regarding the Cedar River Trail are posted online and include new rules restricting bicycle riding on the trail.

The new rules regarding speed:

“It is unlawful for any person to travel on a trail at a speed in excess of posted speed limits or greater than is reasonable and prudent under the existing conditions or in disregard for actual and potential hazards. In every event, speed shall be so controlled as is necessary to avoid colliding with others using the trail. Travel at speeds in excess of 15 miles per hour on any trail shall constitute in evidence a prima facie presumption that the person violated this section.

Travel on the Cedar River Trail, between a) 149th Avenue S.E. and the point where the trail passes under 1-405, or b) the Northwest side of the Logan Ave. bridge to N. 6th St., at speeds in excess of 10 miles per hour shall constitute in evidence a prima facie presumption that the person violated this section.”

Essentially, as you're approaching Renton from the east on the Cedar River Trail, the speed trap begins at the brick Renton welcome sign that depicts a bicyclist tucked in a racing position.

“• The Trail between the South East side of the Branson Way bridge to the North West side of
the Logan Avenue bridge.
• The Trail between North 6th Street and the mouth of the Cedar River at Lake Washington.
• The Pedestrian bridge that crosses under 1-405″

The rules then define what is meant by dismount; you walk your bicycle.

Generally, I use the Cedar River Trail a couple of times a month. I usually keep my eyes open for changes along the rail-trail and noticed the yellow stripe down the middle of the trail a couple of weeks ago. I hadn't noticed the speed limit signs until I rode my bicycle through there on Saturday.

After taking the above photo, I pedaled my bike (slowly, I swear) along the trail.  Some pedestrians appeared to stay to the right of the line, while others were woefully oblivious to its existence and wandered back and forth. In all cases, I shouted that I was passing.

More information about Renton's trails. The city is currently building another trail, the Sam Chastain Trail, that links Coulon Beach Park to the Cedar River Trail.

Speed zone on Cedar River Trail between 149th Avenue and I-405, above 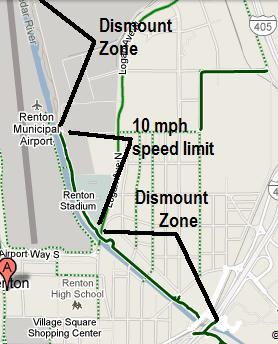 Speed zones and dismount zones between I-405 and Lake Washington, above

Permanent link to this article: https://www.bikingbis.com/2010/08/23/rentons-new-10-mph-bicycle-speed-limit-on-cedar-river-trail-carries-101-fine/