Escaping the Seattle fog: Blue skies at the Hyak trailhead

The John Wayne Pioneer Trail — stretching for 253 miles across two-thirds of Washington state — now leads the list of longest rail-trail conversions in the U.S. [This story is from 2013; the trail is now (2021) named the Palouse to Cascades State Park Trail. It was surpassed in length by the addition to a spur to the Katy Trail in Missouri.] 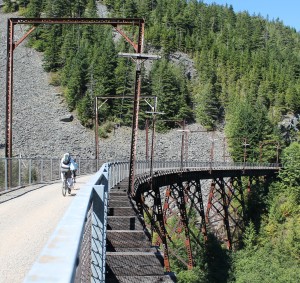 The Rails-to-Trails Conservancy compiles the online list of 14 rail-trails that exceed 100 miles. In the latest update, the John Wayne Pioneer Trail jumped from 4th to 1st overall, leapfrogging the Katy Trail (Missouri), Cowboy Trail (Nebraska) and the Great Allegheny Passage (Pennsylvania and Maryland).

The John Wayne Pioneer Trail was measured at 145 miles in the Rails-to-Trails report two years ago. It’s not clear how the trail gained 108 miles in that time frame, as the railbed has been unchanged since the Chicago, Milwaukee, St. Paul and Pacific Railroad (the Milwaukee Road) abandoned the route in 1980.

The recent reopening of four vintage railroad tunnels earlier this year made more of the trail accessible for biking and hiking. Also, a Spokane bicyclist and several companions undertook an arduous journey along the old railroad bed last summer. Although most of the old railbed is not maintained east of the Columbia River to the Idaho border, they proved that it was rideable. See 26InchSlicks: Crossing Washington State on the John Wayne Pioneer Trail.

Of the longest trails compiled by the Rails to Trails Conservancy, here are the 10 longest that are accessible to bicycles:

Cyclists ride along the nearly dry Keechelus lake bed in the fall.

1. John Wayne Pioneer Trail (Washington), 253 miles — The western section rolls for about 100 miles between Cedar Falls and the Columbia River at Vantage. This well-maintained section passes through the narrow Iron Horse Trail State Park. Bicyclists are treated to dramatic scenery from high trestles in the Cascades and arid plateaus and canyonlands east of the mountains. One of the most visited features is the 2.3-mile-long Snoqualmie Pass Tunnel built 100 years ago.

The going gets much rougher east of the Columbia to the Idaho border. The trail here is often loose railbed ballast. Towns and services are few and far between.

The Cedar Falls trailhead is slightly less than an hour’s drive from Seattle. It’s also accessible by bicycle by a route that nearly all off-road. See all the stories about John Wayne Pioneer Trail at www.bikingbis.com.

2. Katy Trail State Park (Missouri), 238 miles — The route stretches from Clinton to Machens, with many towns in between that offers services to bicycle travelers.

3.Cowboy Recreation and Nature Trail (Nebraska), 195 miles — The rail-trail is the old Chicago and Northwestern Railroad and rolls across northern Nebraska between Valentine and Norfolk. Sections of it have been closed since 2010 because of severe flooding damage.

4. Soo Line Trail — Northern Route (Minnesota), 148 miles — Rolls on gravel and ballast between Moose Lake and Cass Lake. Although bicycling is listed among the uses, it is more frequently used by all-terrain vehicles. The Minnesota state parks department warns — “This trail is not well suited to bicycling.”

5. Great Allegheny Passage (Pennsylvania and Maryland), 141 miles — This is becoming one of the nation’s most popular off-road bicycle routes. While the GAP runs through the Alleghenies between Cumberland, MD., and Pittsburgh, PA., it also connects to the C & O Canal Towpath that runs between Cumberland and Washington DC. Combined, the route is 325 miles and passes many small towns that offer services to bicyclists.

All services are listed at the Great Allegheny Passage website.

6. Columbia Plateau Trail State Park (Washington), 130 miles — The trail follows the historic route of the Spokane, Portland & Seattle Railroad in eastern Washington. The entire route isn’t passable to bicyclists. The state reports that 23 miles of the trail between Lincoln County and Cheney are developed and open for bicycling. Another 15 miles of trail from Ice Harbor Dam to Snake River Junction are open to hikers and bicyclers

7. Flint Hills Nature Trail (Kansas), 117 miles — This rail-trail links dozens of towns across northeast Kansas that offer many services to bicycle travelers. Parts of its are unimproved, however, and rough going for road cyclists. The trails are suitable for mountain, hybrid and cyclocross bikes.

The trail connects with the Landon Nature Trail, creating nearly 150 miles of bicycling. The trails were developed by the nonprofit Kanza Rail-Trails Conservancy.

8. Soo Line Trail — Southern Route (Minnesota), 105.6 miles — Like its sister trail to the north, this rail-trail is mostly devoted to all terrain vehicles. The Minnesota state parks department warns — “This trail is not well suited to bicycling.”

9. Paul Bunyon State Trail (Minnesota), 112 miles — The trail may not be the longest rail-trail in the nation, but it is the longest paved trail. The website reports 112 paved miles from Brainerd to Lake Bemedji State Park. It connects the Heartland Trail, Blue Ox Trail, and the Cuyuna State Trail.

10. George Mickelson Trail (South Dakota) — The trail passes through the Black Hills for 110 miles, mostly through National Forest land. It has more than 100 converted railroad bridges and four tunnels over that distance. More information at the George S. Mickelson Trail website.

12. State Line Trail (Michigan), 107.1 miles — Iron in the soil makes this the reddest rail-trail as it passes through forests between Wakefield and Stager.

Permanent link to this article: https://www.bikingbis.com/2013/10/22/10-longest-rail-trails-for-bicycling-john-wayne-pioneer-trail-in-washington-leads-the-list/