Raising funds to repair memorial to fallen cyclists in Florida

The trailblog for the non-profit Rails-to-Trails Conservancy is featuring the state of Washington in February as “a mecca for self-propelled transport and trail development.” 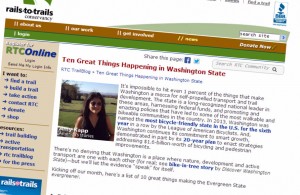 It launched its coverage with the story: “Ten Great Things Happening in the State of Washington.”

It will follow up throughout the month with other aspects of Washington’s awesomeness in eight or nine blog posts. On Thursday, for instance, it will link to a story I wrote at Biking Bis recently, “Vintage Washington map shows today’s rails-to-trail network.” 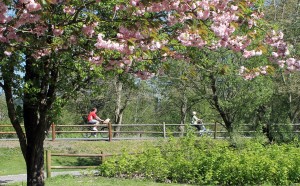 Centennial Trail near Snohomish in the spring

So what are those 10 great things happening in Washington?

Essentially they are projects that various bicyclist, pedestrian and trail advocacy groups are pushing  in the state.

Members of the Washington DC-based non-profit do a lot of hard work to fulfill the mission of creating a nationwide network of trails on former railroad lines and connecting those corridors. Their goal: healthier places for healthier people.

So far, members and supporters of Rails-to-Trails Conservancy have converted some 20,000 miles of railroad right of way  into trails. Fourteen of those trails exceed 100 miles in length, led by the John Wayne Pioneer Trail across Washington that is listed at 253 miles long.

Washington state currently has 77 rail trails that count for 1,051 miles. Another 20 projects at 146 miles are proposed. Michigan has the most rail-trail mileage at 2,712. 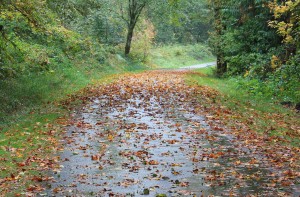 Preston-Snoqualmie Trail in the fall

The staff also does a lot of advocacy work in the nation’s capital. RTC recently filed a legal brief on behalf of the US Justice Department in  the US Supreme Court case Marvin M. Brandt Revocable Trust et al., v. United States. A ruling in favor of Brandt could jeopardize the program to repurpose abandoned railroad right of ways into public trails and pathways.

I’m looking forward to more stories this month on Washington state’s rail-trail network and the great people who create it.

Permanent link to this article: https://www.bikingbis.com/2014/02/06/washington-state-featured-by-rails-to-trails-conservancy-in-february/