Across the Australian outback by bicycle 100 years ago

Would you like to see a trail that bicyclists can use to ride from coast to coast? One already exists. It’s called the American Discovery Trail. 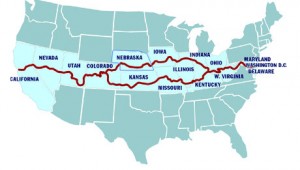 Stretching for 6,800 miles across 15 states, most of the route is on non-motorized trails across public or private land with permission. Where a trail ends, the route-makers use low-traffic roads. The trail passes through parks, small towns and major cities.

Trail backers are trying to bring more recognition to the American Discovery Trail by getting Congress to pass the National Trails Discovery Act of 2014.

The bill would make the trail part of the National Trails System and enable trail workers to post signs to help bicyclists, hikers and equestrians to navigate the route.

Congress created the National Trails System in 1968 to establish and promote trails in both urban and remote areas. At the end of last year, 11 national scenic trails and 19 national historic trails had been designated with a combined length of some 54,000 miles. In addition, 1,200 national recreation trails had been established.

There is an online list of the major trails in the National Trail System, as well as a map. Not all of the trails, such as the Pacific Crest and Appalachian, allow bicycling. 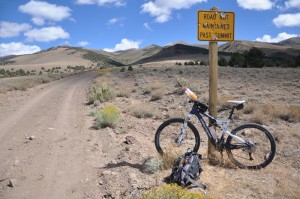 Sponsors of the National Trails Discovery Act note that none of those trails go from coast-to-coast. Adding a long-distance “discovery trail” category to the scenic and historic trails in the 1968 law would create connections between urban and areas, parks, and public lands.

The bill faces opposition, especially in the west where landowners are worried about federal intrusions on land. Peter Schoettle of the American Discovery Trail Society told the Associated Press that westerners in particular have a tendency to view any sort of federal designation as an expansion of the federal government.

He emphasizes that the bill wouldn’t create for any curtailments of building, mining, grazing or other uses of land adjacent to the trail.

Ted Oxborrow, 72, of Carson City considers the Nevada section one of the trail’s highlights, but most congressmen from the state are noncommittal toward the bill.

Oxborrow has ridden the Nevada section of the trail a dozen times, and wants to put up signs along the route to direct travelers as soon as Congress acts of the measure.

We’re hoping this bill to designate the American Discovery Trail as part of the National Trail System makes it through Congress.

Check the American Discovery Trail website for complete information about the trail, including state-by-state cue sheets.

Permanent link to this article: https://www.bikingbis.com/2014/06/19/more-awareness-for-american-discovery-trail-sought-in-congress/