Could a Canadian win the Giro d’Italia on Sunday?

California 3-foot law watered down before approved by Senate 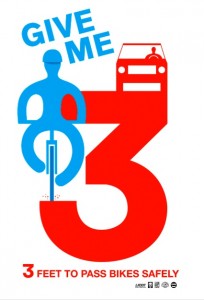 The California state Senate voted in favor of a bill on Friday that was written to require motorists to give bicycle riders a 3-foot gap when passing.

If approved by the Assembly and signed by the governor, California would become the 21st state with a 3-foot buffer law on the books (see “20 states motorists give 3 feet or more when passing cyclists”).

The original intent of the “Three Feet for Safety” legislation, however, appears to have hit a detour.

Sometime after it was submitted by State Sen. Alan Lowenthal of Long Beach on Feb. 24 at the request of the California Bicycle Coalition, an amendment was added that continues the problem it was supposed to solve.

The state law now requires that motorists pass bicyclists by a “safe distance.” That’s a rather nebulous term that is certainly open to interpretation. Establishing a minimum of 3 feet is a lot more specific.

(b) A driver of a motor vehicle shall not overtake or pass a
bicycle proceeding in the same direction on a highway at a distance
of less than three feet between any part of the motor vehicle and any
part of the bicycle or its operator.

The bill allowed a motorist to veer over the double-yellow line if there wasn’t enough room to pass with 3 feet of space.

The amended version of SB 1464 approved by the Senate on Friday has different language. Now, Section 3 (d) states that if the road width doesn’t allow passing a bicycle by 3 feet, and there are reasons not to steer over the double-yellow line:

“the driver shall slow to a speed that is reasonable and prudent, having due regard for the size and speed of the motor vehicle and bicycle, traffic conditions, weather, and surface and width of the highway, and pass at a distance of less than three feet in a manner that does not endanger the safety of the operator of the bicycle and that provides the maximum feasible distance between the motor vehicle and the bicycle and its operator.”

That sounds like the type of on-the-fly safety interpretation that the bill intended to avoid.

The California legislature passed this bill last year, but it was vetoed by Gov. Jerry Brown because he required motorists to slow down to 15 mph before passing a bicyclist at less than 3 feet in these special circumstances. Brown reasoned that slowing down to 15 mph on higher speed streets could cause collisions.

Sounds like we’re heading down that same road again.

How about this? If there isn’t room to pass a bicycle by 3 feet, tell motorists to apply their brakes and wait until they can safely pass.

I know, it’s a radical idea to require motorists to slow down for a few seconds until they can pass safely, but it’s really the only way that makes sense.

Dan Turner wrote an op-ed piece about the law at the LA Times earlier this week. He maintains that, in spite of its flaws, the amended version is “better than nothing.”

Sounds like things haven’t changed much in California since I lived there 20 years ago. You just take whatever you can get.

Let’s hope that someone takes a pen to this bill in the Assembly and removes the exceptions.

Permanent link to this article: https://www.bikingbis.com/2012/05/25/california-3-foot-law-watered-down-before-approved-by-senate/