The words no bike-ride director wants to hear

King County has completed installing a cycle track to connect the gap between two eastside Seattle rail-trails — the Issaquah-Preston Trail and Preston-Snoqualmie Trail. 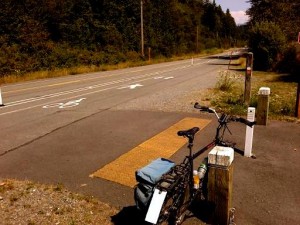 The cycle track, which is the first I can recall in unincorporated King County, runs for 0.7 mile along south side of SE High Point  Way. It’s a two directional cycle track, and is separated from the road by a series of bollards and a double white line.

It’s the second safety feature installed along that stretch of the Mountains-to-Sound Corridor in recent years.

In 2011, the state completed a $4.7 million project to build a 1.2-mile-long gravel trail as an eastward continuation of what used to be called the Issaquah-High Point Trail. It started at the High Point Way parking lot near I-90 and continued east to a point where it connected to High Point Way. It was built to avoid a curvy, hilly section of High Point Way near the parking lot.

The entire trail system from East Lake Sammamish Trail in Issaquah to High Point Road on the outskirts of Preston was then renamed the Issaquah-Preston Trail. It roughly follows the Burlington Northern Railway, which abandoned the right-of-way in 1971.

The new cycletrack begins where the gravel trail meets the road; it ends at 300 Avenue Southeast with a road crossing to the paved Preston-Snoqualmie Trail.

In other trail news:

Bike and pedestrian traffic on the Soos Creek Trail will slowed today through Aug. 13 between SE 240th Street and SE 256th Street in Kent. Flaggers will direct trail traffic around the construction zone.

A short section of the Cedar River Trail will be closed on  [postponed until Thursday, Sept. 4] on a bridge near the intersection of Witte Road SE and SE 221st Street in Maple Valley. That’s near the Fred V. Habernicht Rotary Park. There will be no detour.

Permanent link to this article: https://www.bikingbis.com/2014/08/07/cycle-track-opens-to-connect-rail-trails-in-eastern-king-county/