Another section of Green River bike trail closed until December

We’ve all heard about rails to trails. How about roads to trails?

That is what happened to the old Highway 1 through the scenic Devil’s Slide overlooking the Pacific Ocean.

The state last year moved Highway 1 (aka Cabrillo Highway) up the slope and through a set of tunnels. San Mateo County restored the old highway as a 1.3-mile-long scenic trail for bicycles, pedestrians and equestrians that opened last week.

When I bicycled through this area many years ago as I headed up the coast, I remember being struck by its awesome natural beauty. I also remember wishing I could pay more attention to the scenery as I clung to the right shoulder on this busy highway.

That shouldn’t be a problem on the Devil’s Slide Trail. The route has been striped for a pedestrian walking lane and two bicycle lanes. There are three overlooks, but I’m sure people can stop anywhere to look over the rock wall.

For those who want to drive to it, there are parking lots at the north and south trailheads. Reporting on the new trail in “Devil’s Slide: A new trail on a well-worn path,” SF Gate suggests a couple of routes for bicyclists who want to visit the trail as part of a longer bike loop.[ Map.]

Other “roads to trails”

Turning the abandoned roads into bike trails has plenty of precedents.

The longest one that comes to mind is the 13-mile stretch of the Pennsylvania Turnpike just east of Breezewood. The turnpike, with two tunnels, was bypassed in 1968. Lately, the route has been opened to bicyclists.

Southern Alleghenies Conservancy bought the corridor for $1 in 2001 and Friends of Pike 2 Bike took over its management. One eight-mile stretch of the bike trail passes through two tunnels. More information and maps are available at Abandoned Pennsylvania Turnpike website and Wikipedia. Apparently some ownership changes are in the offing to win public funding for some upgrades. 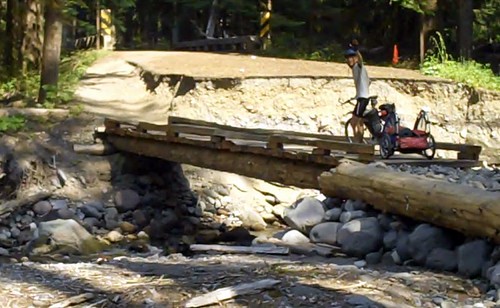 The road was wracked by floods and landslides over the years, and the National Park Service decided in 2011 to stop fighting mother nature. The road is now a 5-mile trail that’s open to hikers and bicyclists.

Permanent link to this article: https://www.bikingbis.com/2014/04/02/closed-road-through-californias-devils-slide-reopens-as-bike-trail/